You can setup bookmarks to any folder on a host running samba with something like this
smb://DOMAIN-NAME;username@host/folder-name/

After providing the credentials. you can browse through the folder on file explorer(for example nautilus on ubuntu).

To access the same from command line, you don't need to mount any network drives, it's already mounted for you.

where 1001 happens to be the folder assigned for my user id.Yours could be different.

This should list all the samba shares that are active.

Are you having a problem with ivy post-download-artifact trigger? Is the ant call target not firing for you? Then read on.

Here is a sample post-download-artifact trigger for handling a zip artifact.

This was discovered by my brilliant co-worker Mike. You can browse his blog here.
Posted by Vishayam at 11:09 AM 0 comments

Jenkins slows down over a period of time. Builds start taking more time than usual. The start up time increases to manifolds. You may wonder that throwing in more memory to the Jenkins process or making the JVM process do garbage collection frequently, etc might make it better. But if that doesn't do the trick, then read on.

One way to check if builds in Jenkins are taking a long time is by running them outside of Jenkins. if you see a considerable difference in the times then Jenkins may be slowing down.

Here is a white paper on optimizing Jenkins written by it's creator with some really nice tips.

But in our case the real reason for the slow performance turned out to be the temp files! Jenkins creates a boatload of them, around 100s  (this depends on how many active jobs you have) each hour and doesn't bother to clean them up at all.

On windows platform  Jenkins writes to C:\Temp and on Linux it is /var/tmp. Luckily there is a plugin which can be configured to clean out these directories. For example you could setup the plugin to keep files which are a day old and get rid of the rest.

Try it out and see if that makes Jenkins sprint.
Posted by Vishayam at 10:31 AM 0 comments

Task Manager has been the default process manager on windows systems for a long time and even today. Sysinternals, a company Microsoft acquired way back in 2006, has a suite of troubleshooting tools.The process monitor from Sysinternals called Process Explorer, is much more useful, cool and powerful than the good old windows Task manager.
You can see things like the runtime program directives, process tree and many more for a live process.
You could query a process, on which  files it has open or find out all processes that have a handle on a data file. Those are really helpful features for trouble shooting.

Here is a first look at process explorer 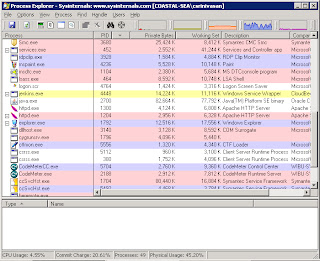 To look at the files that are used by a process, You can turn on process tree from the view menu.  Here is the process tree. 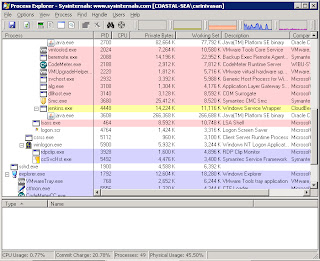 Further if you want to find the process holding on to a file then use the search feature and let's search for processes using java.exe 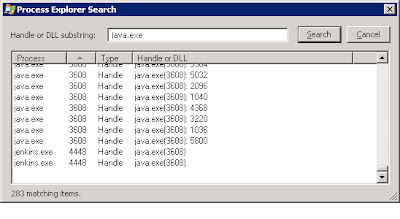 That of course lists tons of processes. Now let's try a more refined search, for a log file. 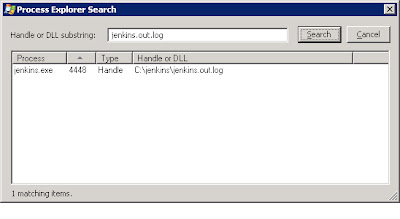 There are many more useful features that you can explore further with Process Explorer. I always felt Process Explorer could be included  as part of the regular windows distribution!
Posted by Vishayam at 6:38 PM 0 comments

IvyDE (the eclipse plugin for Ivy) manages dependencies by automatically downloading them from the repository. It also attaches the sources(if they are available in the repository) to binaries under the hood without any custom settings. Helps to debug the source for any dependency.

That's great but what if you are working on multiple projects at the same time and want to test/debug the new code that you are writing in a dependency module.

Now if the dependency is used in multiple  projects(say B and C) and B and C are dependencies of project A,  then you have much more work to do.
Like

A quicker and much more cleaner alternative is to add the dependency (project X) to the main project's (A) buildpath and move the order of  X to the top of the classpath. In Eclipse IDE, this is available under "Order and Export" tab of "Java Build Path" menu under project properties. As shown in the picture below. 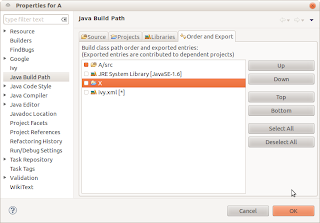 You are done. Set a breakpoint within project X and see how it goes!

Posted by Vishayam at 1:03 PM 0 comments

IvyDE an Eclipse plug-in for Ivy makes it a lot easier to work with Ivy. Some of the notable things that IvyDE does are automatic resolving of dependencies when ivy.xml is modified or the first time a project is loaded, ability to clear caches by providing a sub menu, Error checking/validation of ivy configurations and so on.
Once you install IvyDE and enable a project to use IvyDE for managing dependencies, you lose the ability to attach a source to any of the jars in the classpath. That makes it difficult to debug the source for any dependency. The crude way I was doing it was to comment out the said dependency in ivy.xml. Saving the file should trigger a resolve on the project. That should remove the dependency from the build path. Then add the desired project to the classpath.

I found out later that it doesn't have to be that way though. IvyDE provides a neat way out. Even though there are no examples of how exactly to setup configure. After numerous trials and errors I got it working. Hope somebody else who is trying to Debug source with Ivy finds this post useful enough.

I created a tutorial at the following location. Utility is the project which publishes a binary Utility.jar and Utility-source.zip artifacts. TRY-IVY-DEBUG is the project which uses Utility.jar and has a simple class Test.java that can be used to debug into the source.
There are two configurations defined, default and source. The description attribute is self explanatory. The artifacts are Utility.jar and Utility-sources. The key here is type=”source”. That's one of the two things IvyDE is looking for when trying to bind the sources to the jars. The other requirement is that the source artifact name suffix needs to match the ones in default IvyDE configuration as shown below. 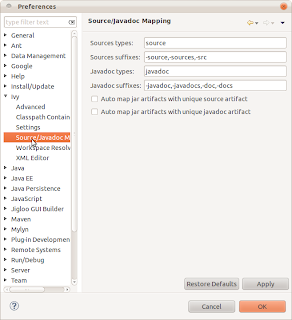 If you load the two projects mentioned above in eclipse. Build the Utility project using the included build.xml and perform a resolve on the TRY-IVY-DEBUG project. That should make eclipse download and attach the Utility-sources.zip to the Utility.jar artifact.You should now be able to debug Test.java class and step into the attached source.
Posted by Vishayam at 1:18 PM 0 comments

Publishing to a branch using Ivy

Ivy off the shelf works fine if you are not dealing with branches. The examples in the samples that can be downloaded don't have much for using branches. That's because branches are optional for Ivy. All it cares about is the module name and revision number for getting the last build number or publishing an artifact to the repository.
If you can live without branches then things are fine with Ivy as a dependency manager. But life is not that simple! Once I started using branches everything went haywire. Because I had not made the configuration changes in all the right places. Having figured it out the hard way, would like to share the list of fixes.
The things to do when configuring ivy for branches are
ivy.artifact.pattern=[organisation]/[module]/[branch]/[revision]/[artifact].[ext]
ivy.pattern=[organisation]/[module]/[branch]/[revision]/ivy.xml